Last night’s Alameda Wine Walk, billed optimistically as the “First Annual,” was a baby step or two in the right direction. The event’s organizers and promoters should be 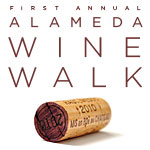 pleased with their work on what many Alamedans hope will be an annual event.

There was a good vibe to Park Street last night as wine lovers strolled in and out of shops and businesses that were open late to host the participating wineries. I myself saw the inside of a few shops that, I have to admit, didn’t even know existed. An eye-opening experience for me and for a number of friends I ran into along the way. Alameda is not the first small city around the country to host such an event, but the decision to make the effort was the right one. Anything that builds community spirit, boosts local business, and generally spreads good cheer can’t be a bad thing. However…

With every new idea comes lessons, the need to work out the kinks and polish up those ideas that somehow ended up being not so bright. Last night’s Wine Walk is a new idea

and certainly no exception to this rule. I’m completely mindful of how much effort and strain goes into planning, coordinating, and executing such a large event, and have no desire to condemn or ridicule. So, what can we learn from some of last night’s missed opportunities?

1.  A Wine Walk should have good wine. It’s silly that I even have to say that but somehow last night’s event had less than its share of decent juice. Northern California, and the East Bay in particular, is experiencing a wine boom. Wineries are opening all the time, quality Napa and Sonoma producers are bursting with inventory, and more and more folks are getting savvy to all the great producers this area claims as its own. So, if all that’s true, and it is, why was there so much wine of questionable quality last night? If it hadn’t been for the quality of  the wines from Rock Wall Wines, which hosted six of the 18 stations, a full third of the night’s choices and more than it should have been asked to cover, the wine part of the Wine Walk would have been a bust. No other producer came close in quality. Even if they were close, why were organizers only able to round up eight wineries to participate? This piece of the puzzle needs to be improved in a mighty way before next year’s event or we will not see a Third Annual. It’s that simple.

2. By duplicating the event on Webster Street at the same time, organizers diluted their potential participation levels in both location by half. Was any thought given to running a walk on Webster in October and then a similar event on Park in April, or something along those lines? Such a scheme allows more wineries to showcase their wares, exposes all Alamedans and folks from surrounding towns to both neighborhoods and the businesses there, and increases the critical mass that generates those feel-good elements that organizers clearly intended to capture.

3. Planning, planning, planning. For an event of this size and scope, better attention needs to be paid to the details. There were too many inconsistencies to ignore, too many oversights to excuse. Every station should have been equipped with sufficient napkins, water, and food items. Spit buckets should be in place at every station and they should be cylindrical, not concave. Nothing like having a good, vigorous spit splash right back onto your shirt to make you feel good about the event. Dump buckets by the door 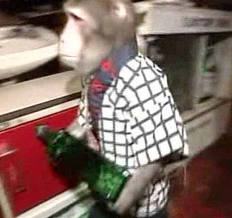 needed to be more visible. Of course, getting the city to grant a public drinking waiver for participants wearing legitimate bracelets would have been even better. It certainly would have brought the conviviality out into the streets and not kept it penned up inside the stores; but, that was the intention all along, wasn’t it?

4. The organizers’ decision to utilize the local restaurants they way they did put businesses at cross-purposes. If I’m in the Dog Bone trying to say nice things about the Foggy Bridge wines, then I can’t be in Linguini’s hoping that my half-price bottle of wine has been stored properly. And vice versa. Maybe organizers shouldn’t involve the restaurants at all. But if they are involved, organizers need to come up with an idea that benefits them and their commercial colleagues to the same degree.

This event has the potential to become a major event for the city. But the time for baby steps is now past. Major strides need to be taken if the Wine Walk is going to become a signature event on the city’s calendar.

6 thoughts on “Walk This Way”