At some point in your journey through the wine world, this has happened to you. You’re strolling the aisle of a wine shop or grocery store eyeballing the various bottles. You’re reading the labels and seeing words like chardonnay, cabernet, pinot noir, riesling, zinfandel, and then, all of a sudden, up pops Rioja. And you stop. What the hell? Is that a vineyard? A winery? Is it a grape? What’s Rioja? After a few more seconds of reading you realize that the bottle you’re looking at is from Spain. But the big word in capital letters in the middle of the label is giving nothing away.

one of two things happened. Either your curiosity got the better of you and you picked up one of these alien concoctions for further investigation, or you walked away, your head shaking in frustration, and returned to the safety of American wine, where the labels at least let you know what flavor you were looking at. If you were lucky enough to take the former path, you probably went home, poured a glass and did a little homework on the wine you were enjoying, and your reading told you that your glass was filled with wine made mostly, or entirely, from a grape called tempranillo, Spain’s noblest grape.

Tempranillo, from the Spanish word temprano, which means early, is named such because it ripens typically two weeks before many other varieties. It is a red, or as the wine pros say, black grape native to Spain, and has been cultivated in the 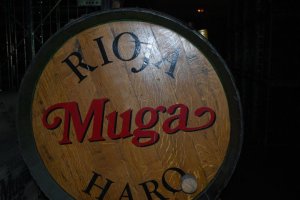 La Rioja and Ribera del Duero regions since the Romans walked those hills 2000 years ago. A thick skinned grape, it prospers most at higher altitudes, which allows for the development of essential acidity. Warmer temperatures give it thicker skin, and thus greater tannic depth, along with the rich fruit and deep ruby color aficionados love so well. But finding that combination of altitude and warmth is not an easy task, which is why it has been most well known as the wine of those two regions for so long. In areas where those optimum conditions are unavailable, it is often blended with grenache or international varieties like cabernet sauvignon and merlot, which give the wine the structure and balance, i.e., the acid and fruit, it needs. Planted widely throughout the Iberian peninsula, it is also known as Ull de Llibre in Catalonia, cencibal in Valdepeñas, tinto fino in Ribera, and tinto roriz in Portugal, where it is a mainstay for that country’s illustrious port wines. In its youth it offers flavors and aromas reminiscent of cherries and red berries; years of aging results in wines of great complexity and elegance, with tell-tale notes of vanilla and oak.

While tempranillo has thrived in Spain and Portugal for centuries, it is no stranger to the new world, and, after some starts and stops since its arrival in the 19th century, is now t

hriving in such disparate locations as Argentina, Oregon, Thailand, and New Mexico. Currently more than 200 wineries in Australia produce some version of tempranillo-based wine. Growers are finally finding those special spots with both altitude and heat that the grape loves so well.

So do a little homework and be on the lookout for tempranillo, whether from Spain or the New World. Talk to your local wine merchant for tips on different regions, vintages, and values. You’ve been missing out on some of the world’s great wines for far too long.

One thought on “Geek Of The Week — Tempranillo”