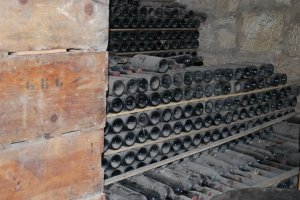 A friend and I were chatting online a few weeks back about various wine-related matters and he told me about some wine he had enjoyed the night before. This fellow is a school teacher and so looks for wines that are reliable and won’t bust his budget. He was pleased to have found Coppola’s Claret (~$20) and very much enjoyed two glasses with his dinner that night. He then told me that he corked the bottle and gave the rest to a neighbor, saying, “I don’t like wines the second day.”

While I am a true defender of the notion that people should only drink what and how they like, I immediately thought, “Big mistake.”

How many bottles did I ruin, early in my oenophilia (man, that sounds dirty…in a good way) by not understanding the relationship between oxygen and wine, by not realizing how much wines can and will change once that cork is popped and the wine gets to fill its lungs with some much needed air? While it’s true that many wines on the market today are ready to “pop and pour,” there are wines that need more than a few minutes of oxygen before the aromas and flavors will come alive.

I can recall a specific evening years ago when I brought a bottle of Torre Muga to a dinner at the home of some friends. Midway through the dinner, it was time for another bottle

to be opened and I happily grabbed this reserva that I couldn’t wait to share. Pulled the cork, poured the wine, and, and, and…nothing. No aroma, very little flavor. Nothing. The wine was consumed quickly and politely and we moved on to something more accessible. I felt like an idiot. Years later, I did a little due diligence before trying my next Torre Muga, and everything I read told me that this particular wine needed HOURS of air before it even started to budge, before any cracks in the armor would be even slightly discernible. An expensive lesson, that first bottle.  And not just in terms of cash.

Last week, after my IM chat with my friend the teacher, I had a chance to review and relearn this lesson once again.  My wife and I had put together a reasonably special dinner to mark our first night as “empty nesters” and I wanted a

halfway decent bottle for the table. I pulled a 2004 Ladera Lone Canyon Cabernet Sauvignon and decanted it as quickly as possible, for optimal aeration before dinner was ready. Well, it was off from the minute the cork left the neck of the bottle. Funky nose, flat on the palate but in an odd, disconcerting way. I’d enjoyed this wine a number of times before and so wasn’t quick to condemn it. I figured it just needed some time to come around.  I covered the decanter with cellophane, set it aside, and opened a 2007 Chateau Montelena Estate Cabernet. Yeah, I know, way

too young, but the pressure was on and I needed something good. I should have grabbed another decanter. C’est la vie. The Montelena was a bit green on the nose but nothing offensive. The body was light and the flavors, while typical, were a bit muted. More tannins than anything else. Still, it opened enough over the next hour or so and ended up being a great accompaniment to the meal. Had enough left to cork and set aside (an odd night in our house – two bottles opened, both survived to fight another day).

The next day the Ladera was now smooth in all the rough places, but it remained off-balance, with the fruit not holding its own with the tannins and acids, to the point of not being worth the time and effort to consume. Down the drain it went. An expensive whiff. The Montelena, on the other hand, was great! Open and full, any greenness gone, flavor and finish that went on and on: major improvement from the previous evening. So glad I enjoyed

what it had to offer at this point in time.

So, what was learned here? Well, decanting, for one, is something worth thinking about more often than not. Too many good bottles fail to shine their brightest simply because they’re not given the chance. Second, letting big wines like Napa cabernet get a bit more time in the cellar before putting them on stage is probably a good idea. Finally, what was pretty good on night one might be fantastic on night two. You just have to be willing to wait.

So, Mike, stop being so generous to your neighbors and start enjoying that second half of the bottle. You might be surprised how much you like drinking the same wine two nights in a row.

One thought on “I’ll Talk To You Tomorrow”