A recent note from one of my older brothers stopped me in my tracks. Despite being a well-read and worldly man, and one who certainly loves a good glass of wine, he admitted that he didn’t really know what the word claret meant. If he didn’t know, how many other folks who love wine don’t understand the term?

Of course, if you’re a golf fan, you’ve heard of the Claret Jug that is awarded to the winner of golf’s oldest major championship, the British Open. And, if you’re reading a novel about Britain in the 1800s, you’re encountering the word claret constantly. My brother, in fact, is nearing the end of Patrick O’Brian’s Aubrey/Maturin series, which chronicles life aboard British Navy vessels in

the 19th century, where some drink called claret is omnipresent. So, what the heck is claret?

Our correspondence, in full.

How about a question?  I could call it a trick question for most people but I don’t think this will be much of a challenge for you but I’d like your thoughts on it.  What is claret?

The reason I ask is that one of the most interesting tidbits in the Patrick O’Brian series
(I’m on book 20), is the food and drink that is a constant topic of these Napoleonic-era sea stories. Claret is consumed in prodigious quantities at all hours of the day and night

by everyone in these novels. Lobscouse & Spotted Dog: Which It’s a Gastronomic Comapnion to the Aubrey/Maturin Novels by Anne C. Grossman & Lisa Grossman Thomas and A Sea of Words: A Lexicon and Companion for Patrick O’Brian’s Seafaring Tales mention claret but never say what the folks in the early 1800s considered it to be.

I believe that claret is the old name for the wine known today as Merlot (a Burgundy wine?).  But I have no idea if I am correct (or even if Merlot is a Burgundy wine). 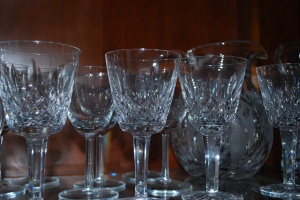 Can you help me with this?  The real reason I ask is that I want to buy some claret, or whatever its name is these days, and drink it out of a real claret glass while I complete novel number 20 and move on to number 21.

Great questions. I’ll do what I can.

First, merlot is not a Burgundy grape. The only reds allowed in Burgundy are pinot noir,

which is the dominant red grape in the region, and gamay, the star of Beaujolais, which sits at the bottom of the Burgundy region, but is seen as a distinct appellation. Merlot is one of the five main red grapes of Bordeaux in the west of France, along with cabernet sauvignon, cabernet franc, malbec, and petite verdot. Those five grapes are what make up any red Bordeaux wine, in various blends and proportions, with cabernet sauvignon dominating in the wines of the left bank and merlot dominating in the wines of the right bank (a map of Bordeaux would help you here). Much of this distinction has to do with soils and which grapes grow best in what soils.

As for claret, I’ll give you what’s in Jancis Robinson’s The Oxford Companion to Wine, maybe the most well-regarded reference book in the business. According to Ms. Robinson, MW:

Claret: English (not American) term generally used to describe red wines from the Bordeaux region, or red bordeaux. Claret has also been used as a generic term for a vaguely identified class of red table wines supposedly drier, and possibly higher in tannins, than those wines sold as generic burgundy [see above for pinot noir]

(although, in the history of Australian wine shows, it has been known for the same wine to win both claret and burgundy classes).

In medieval France, most red wine was the result of short fermentation, usually of no more than one or two days. The short period of contact with the grape skins meant that the resultant wines were pale in colour, and were probably very similar to the rosés of today. Such wines exported from Bordeaux were known as vinum clarum, vin clar, or clairet, and it is from the last of these that the English term Claret is derived. Other much darker wines were also made by pressing the remaining skins, effectively the same as modern press wine, and these were known as vinum rubeum, bin vermelh, or pinpin.

Although the term clairet was widely used during the medieval period in France, the word claret does not appear to have been used at all extensively in 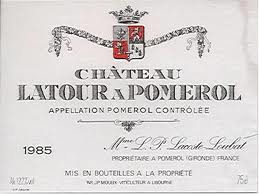 England until the 16th century. In the second half of the 17th century, a new type of wine, of much higher quality and deeper colour, began to be produced in the Graves [southern Bordeaux] and on the sands and gravels of the Medoc, to the the northwest of Bordeaux. These wines, the provenance of specific properties, where close attention was paid to grape selection, improved methods of vinification, and the use of new oak barrels, became known by the beginning of the 18th century as New French Clarets, and the earliest and most famous of them were Haut-Brion, Lafite, Latour, and Margaux. (end Robinson).

Based on the time frame of the O’Brian novels, I’d have to guess that the characters were drinking what we know today as bordeaux, wines made from the five grapes noted above and in that region of western France. French wines, and this was certainly true centuries ago, tend to be lighter in body and alcohol than their American counterparts, with alcohol levels of 12.5 % or so being typical. Good luck trying to find a California red at 12.5 % these days. Also, I have been with our sister Monica in Spain when she has ordered clarete, and the wine produced was somewhere in color between a bordeaux-style red and a pink rosé, more of a bright, light red color. Many wineries in Spain and other parts of Europe still make their rosés in this bright red color (Floresta’s rosé is but

one good example and a nice bargain), which is certainly in keeping with the traditional method cited by Robinson above. In Provence, in the south of France, the rosés are almost uniformly pink, or near that color. Muga, one of our favorite producers, and a number of other more modern Spanish wineries have moved to that model.

So, if you want to drink along with the O’Brian characters, find an affordable red wine from Bordeaux, get it at a nice temp (stick in the fridge for 20 or 30 min before opening, just to calm it down), and pour a modest serving. These guys were at sea; I don’t imagine most good captains operated half in the bag. If they did, they probably didn’t get to remain captain very long. But you’re the navy

guy so you’d know better than I. Now that you are a landlubber, however, feel free to replenish your crystal goblet often. (The wines from the Entre-Deux-Mers region are underappreciated and can offer some good value.) Hope this helps. If you need more info, just holler.

5 thoughts on “Geek Of The Week — Claret”