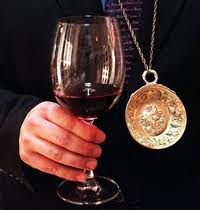 A few nights ago my family and I enjoyed dinner at a popular San Francisco restaurant. The ambience, food, and service were impeccable. Or so we thought.

With our entrees my wife and I ordered a half bottle of 2009 Clos du Caillou Chateauneuf-du-Pape Les Safres. When the sommelier brought the bottle he presented the label to me for examination. He chatted with me while he opened the bottle. He poured a splash in my glass for me to taste and approve. When this familiar ritual was finished and he had left the scene, my daughter, now in college and very much in tune with the political and social ramifications of sexism, asked if I thought wine service in restaurants was sexist. Why didn’t mom get to taste the wine, too? Were the actions of the sommelier just then an indication of sexism at work in the public dining room? I thought for a moment and said, “Possibly, but if so, I think completely unintentional, totally unconscious.”

Over the past few days I’ve given this question quite a bit of thought. I don’t think the man pouring our wine earlier in the week was a chauvinist, but how could I really know? So what if his deference to me was unintentional, or, worse, unconscious.

Maybe he was trained to present and serve wine to the man at the table first. I do know that on only the rarest of occasions has a bottle arrived at our table and the waiter or steward poured a taste in both my and my wife’s glasses. Now, granted, I do most of the wine ordering and so reflexively attending to me first is not without cause. But shouldn’t the other adult at the table also be asked?  What no waiter knows, except those at the local eateries we frequent, is that my wife makes the lion’s share of our income, that it is her paycheck that pays for our dinner. The wine, in a purely technical sense, is hers. Of course, we can’t expect restaurant staffers to know that. But, given today’s social realities, should the man-as-breadwinner cliché still be in play? Should such an assumption be a given?

According to Freda Mooncotch, who blogs on wine at The Wine Wench (www.winewench.com), as of 2005, citing data from the New York Times, “women purchased 77% and consumed 60% of wine in the United States,” and, in 2009, “the Wine

Market Council reported that Women account for 64% of wine consumers in the United States. Additionally, WineSpectator.com published their 2009 survey results and discovered some interesting things:

–Women drink 60 percent of the wine consumed in the U.S.

–93 percent of respondents drink wine at least once a week. (Given that the survey was of Wine Spectator readers, this is not an accurate reflection of the public at large.)

–80 percent drink most of their wine with meals.

Given the preponderance of the evidence that women buy and 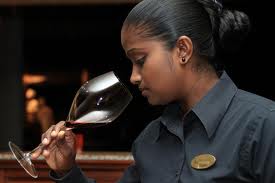 drink boatloads more wine, literally, than men, why are they so easily and so often ignored if they happen to be dining with a man? My wife and I have decided that from now on, when dining out, we will discuss our wine selections as we have always done, but she will place all wine orders. We’re going to keep a running tally of how many times wait staffs defer to me despite her having taken the lead at the table. I really hope we’re wrong about wine service being sexist. I have a suspicion we’re going to be disappointed.

I would love to hear from readers who have experienced possibly sexist treatment when ordering wine in a restaurant. And, for women dining without a man at the table, have

you ever been condescended to or treated with anything but the most respectful service? I’d like to hear about that, too. There is no excuse, in this day and age, for women to be taking a back seat to men. Especially when it comes to something so essential as wine.

9 thoughts on “Is Wine Service Sexist?”