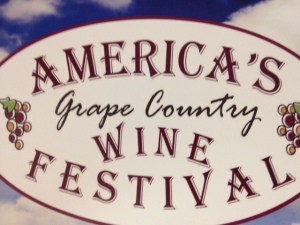 Despite spending the past 25 years in California and Connecticut, I’m a New Yorker through and through. And, as such, I tend to root for the home town team, wherever it might be found. In recent years I’ve tried my best to defend wines from New York’s major regions – Finger Lakes, Long Island, Hudson River Valley – and done what I could to prop up the fledgling efforts in Chautauqua County and along Lake Erie. While I am, by nature, an optimist, I know enough about wine and my home state to keep my cheery outlook in check. In short, when it comes to New York State wines, I often need to manage expectations. Especially my own.

Manage expectations. That was my goal, my mantra, when I stepped inside the Chautauqua County Fairgrounds in Dunkirk, NY, last week for “America’s Grape Country Wine Festival.” Still in its infancy after five years, the AGCWF is a gathering of wineries from the Finger Lakes and the Chautauqua-Lake Erie Wine Trail regions. 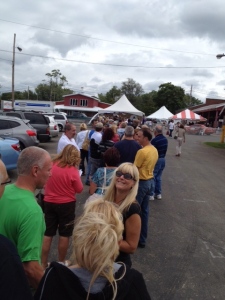 Twenty-two producers, along with a numerous food and craft vendors, crowded into the fairgrounds’ exhibition center, Floral Hall, for tastings, demonstrations, and seminars.  I was focused only on the tastings, and as many dry wines as I could find.

Due to the large crowds, which overwhelmed more than a few tasting booths, I was able to sample wines from only half of the visiting producers. Even though I was hoping for the best from area winemakers, I came away disappointed. The two points that caused the most frustration were, one, the mediocre to poor quality of many of the wines, and, two, the confusion many wineries seem to have as to what sort of winery they want to be. 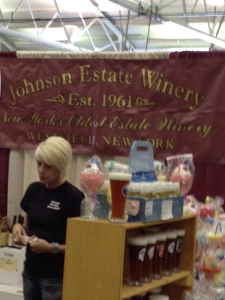 catawba, pinot noir, merlot, cabernet sauvignon, cabernet franc, chancellor, and chambourcin. I also dipped into a few sweet wines containing concord and niagara. Many wineries’ rosters were dominated by wines made from fruit other than grapes. In the interests of time and convenience, I adapted my tasting scale to the program’s proposed six-point scale. No, there were no six point wines to exult in.

The winery with the best overall showing was Miles Wine Cellars out of the town of Himrod, on the shores of Seneca Lake. Two four-point wines and two five-point wines outshone most other wineries’ wares. “Ghost,” which was a blend of Cayuga white and something else (went to the website for help but no avail), was crisp, fruity and refreshing; perfectly balanced. “Long Weekend,” another Cayuga white with 3% residual sugar, was similarly well-made. Their merlot and “Call Me a Cab” (franc) were among the better reds on the floor. Other notable pours included five-point chardonnays from 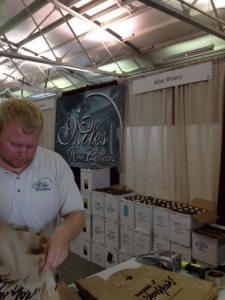 Finger Lakes producers Hazlitt 1852 Vineyards and Heron Hill. A riesling from Thousand Islands Winery in Alexandria Bay was a bit on the light side but otherwise spot on, one of the best made wines I came across. Merritt Winery’s “Bella Rosa,” a sweet concord concoction, was a pleasant surprise. Clean, balanced, and its sugars restrained, I can now understand why so many friends from Fredonia, near Merritt’s home in Forestville, defend it as they do. Not my cup of tea, but a well-made wine.

The aforementioned wines, however, were the high point of the afternoon. A few low points included a sauv blanc that took the descriptor “cat pee” to a staggering, almost injurious level. And then an overwhelmingly bretty chancellor that the pourer tried to pass off as “spicy and interesting.” Not quite the words I’d use. Too many wines were overoaked and overly lean. A number seemed to lack any real fruit development at all. I had a chardonnay that tasted like no wine I’ve ever encountered. Still can’t figure out what was done to produce that. And so the day went. Perhaps with a more manageable crowd and more access to additional wineries, I might have found a few gems to turn my frown upside down. 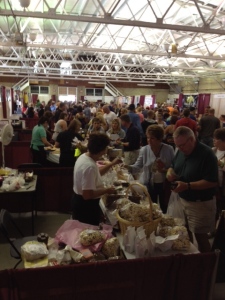 Ah, the crowds. Yes, the place was packed, and that’s a problem for the event’s organizers. But it’s a good problem to have, I think. They have a tiger by the tail and they need to act fast to tame it so as not to lose the impressive momentum they’ve built in five short years. The toughest part of this challenge is space: where to find it and how to use it. Is the current arrangement, a seemingly random array of vendors, optimal? Should the disparate groups be separated? If so, how far apart? More space would mean more wineries; more wineries would attract more visitors. Any increase in commercial activity for this part of the state has to be seen as a positive. Perhaps there are other sites in Northern Chautaqua County with better layouts and more square footage. I leave it to those in charge to investigate, but it seems to this visitor that the current Floral Hall set-up has run its course. Time to move, and fast.

Next: What do these wineries want to be when they grow up, and how they might start heading in that direction.

6 thoughts on “In A New York State of Mind”