I have gone far too long between Geek Of The Week postings, so I thought I’d return to this feature in extreme fashion, with a brief look at Sereksiya Chernaya, a variety indigenous to Moldova and Romania.

Known in Romania as Băbească Neagră, “grandmother’s grape,” where it is the second most planted variety after merlot, sereksiya produces wines that are usually light and fruity with bracing, mouth-watering acids and just enough tannin to give it some structure.

Sereksiya’s presence in America is a good news-bad news situation. The bad news? Only one producer, McGregor Vineyards in the Finger Lakes, is known to grow and vinify this delightful variety. The good news? Knowing that it exists only in upstate New York makes it easy to find. But maybe you’re thinking, “Is this a wine that 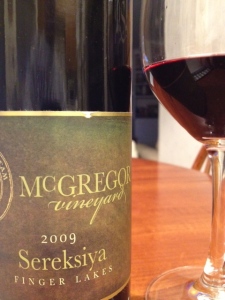 I want to find?” After enjoying a bottle of McGregor’s unique production, the answer is a resounding yes.

The McGregor 2009 Sereksiya is a deep garnet-approaching-purple, almost opaque wine, offering aromas of sweet cherries and raspberries, accented by notes of pepper, damp earth and savory flavors. While the label describes the wine as “off-dry” I was hard pressed to find any real sweetness in the mouth. Maybe I was too focused on the tart raspberry notes, which were backed up by hints of dry herbs and cedar. This is a balanced, structured, well made wine. Given its depth of fruit, acid, and tannins, I’m confident it has the potential for some aging. Versatile for a variety of meals, and just light enough to enjoy by itself.

If you can’t get to the winery in Dundee, on the eastern shore of Keuka Lake, give a call to Empire State Cellars out on Long Island. I know I’m going to.

4 thoughts on “Geek Of The Week — Sereksiya Chernaya”