On our first night in Bayeux, the owner of the B&B where we were staying, Hotel Tardif, made a reservation for us at L’Angle Saint Laurent, telling us that it was one of his favorites because it tended to draw a crowd that was more local than tourist, something we always appreciate, despite the fact that we are, indeed, tourists.

Given our first night’s experience, and what everyone had told us about wine in Normandy, we expected to be disappointed with whatever the carte du vin offered. Well, surprise, surprise. Not only was this restaurant a quiet, elegant gem, but the wine list was smart, diverse, and dotted with great values and respectable labels. Now, it is said that a single exception proves the rule, but if there was one exception in the area, I figured there had to be more. Maybe there wasn’t even a rule about bad wine in Normandy. My optimist’s gas tank was refilled.

A few days later I began to believe that the slam against the Normandy wine scene was indeed a sloppy generalization, as much hit as miss. In Honfleur, visiting only for an overnight, we had a solid Sancerre at lunch and very good rosé and Meursault at dinner, with both restaurants presenting lists that offered more than the pedestrian plonk we had run into in a few places. In fact, it had become clear that Normandy was not all that different from most areas at home and abroad. There was plenty of low, barely

digestible stuff out there, but also ample amounts of good stuff if one had the good fortune to bump into it. Our second night in Bayeaux we found a restaurant, La Table du Terroir, that lived somewhere in the middle. The food was fair, not great, and the wine played its proper role. No fireworks or trumpets, just good tasting, affordable wine (Sancerre, again) that was balanced and paired well with our meal. You can hope for more from simple table wine but you’re a fool to expect it.

At each of our four dinners in Normandy I made sure to order Calvados as the meal’s appropriate closer. Like all things, there’s the good, the bad, and the ugly. Our first night, at the Auberge Saint-Pierre in Mont Saint Michel, I lost my Calvados virginity to a complete hag of a snifter. All booze, no flavor, hot and raspy from start to finish. Staggered but not defeated I figured things had to get better, and they did. The next night, at L’Angle Saint Laurent, the waiter brought a 13-year-old pour (same price as the first night!) that wasn’t quite sublime but wasn’t too far off. The following evening, which found us enjoying the aforementioned fair meal at La Table du Terroir, we were back down to just tolerable. A faint suggestion of apple but not overcharged on the alcohol, this sample of Calvados fit right into the dinner’s overall quality. Our last dinner,  at Cote Resto in Honfleur, was a quick return to the top shelf. This cozy and friendly family

restaurant listed several aged Calvadoses. I settled on a 20-year-old and immediately understood all the hype, all the buzz. This was a sublime distillation of the region’s ubiquitous apples. Full-bodied, loaded with fruit, but restrained and elegant. I knew the alcohol level hovered around 40 percent (80 proof) but you would have never guessed such numbers simply by tasting it, all its elements being so well integrated. I’m never going to be a Calvados aficionado, as I prefer my spirits in cocktails (whiskies aside) and have never developed a taste for the powerful aromatics of things like brandy and cognac. Still, if these potent potables are up your alley, learn what you can about Calvados and keep a keen eye out for the good stuff. There’s a reason the people of Normandy continue to produce and enjoy this, at times, magical elixir.

Oh, I almost finished this without telling you about the carafe of red Cotes de Blaye we encountered at lunch in Arromanches at Le Pappagall. We each enjoyed a stunningly delicious, medium-rare bavette steak, served along with a heap of fries that could teach a graduate seminar on how potatoes ought to behave in hot oil. All for just under 11 euros each. A simple lunch that made us sit up and take notice. 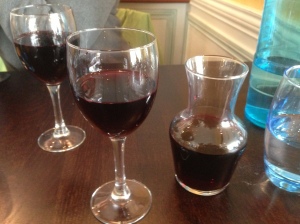 And then there was the wine. But that’s all I can say, because even France and Spain have obscenity laws.

Next up, we travel to Barcelona for some family time and visits to old favorites and new discoveries. Buen viaje!

One thought on “Seek And You Shall Find…Sometimes”