We are in Madrid to help our daughter find an apartment as she prepares to begin a year of living in Spain as a Fulbright English Teaching Assistant. We are pressed for time as she loses three days to orientation and we can’t stay forever. Still, despite the time crunch, we are finding ways to enjoy our visit to Spain’s magical capital. All work and no play makes us duller parents than we already are. So, we’re not going to let that happen. Here’s a look at our first two days. 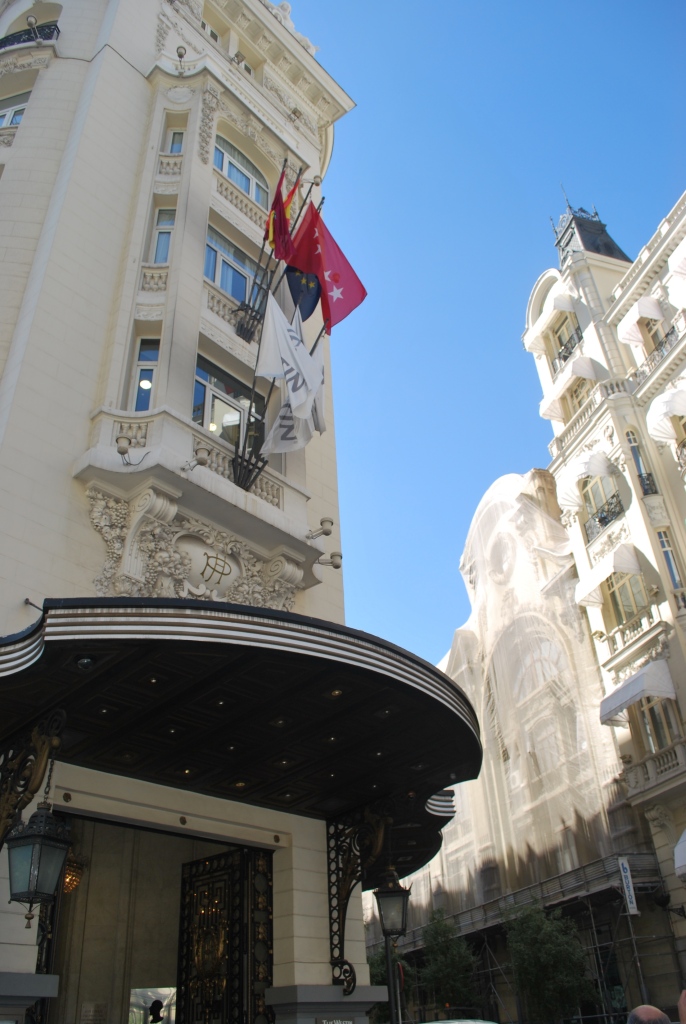 The front of our hotel against Madrid’s azure sky. 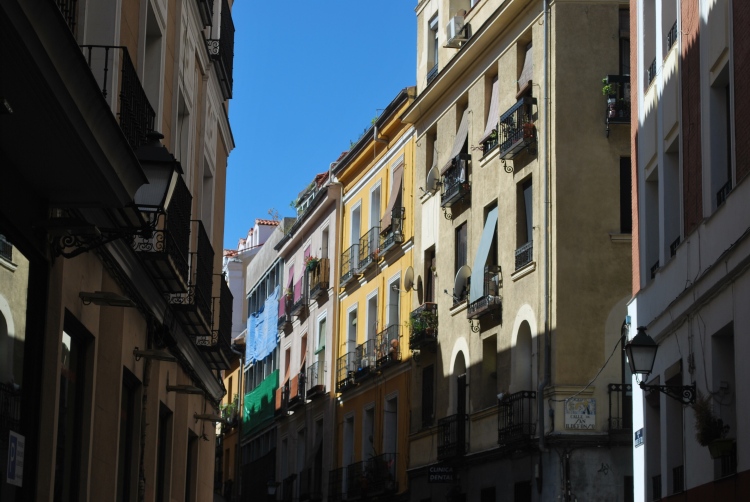 Through all the neighborhoods we wandered, the one constant was the panoply of bright colors against the bright blue sky. I often wonder, after many trips to Europe, why America hasn’t fallen in love with a broader palette. We are still too monochromatic. 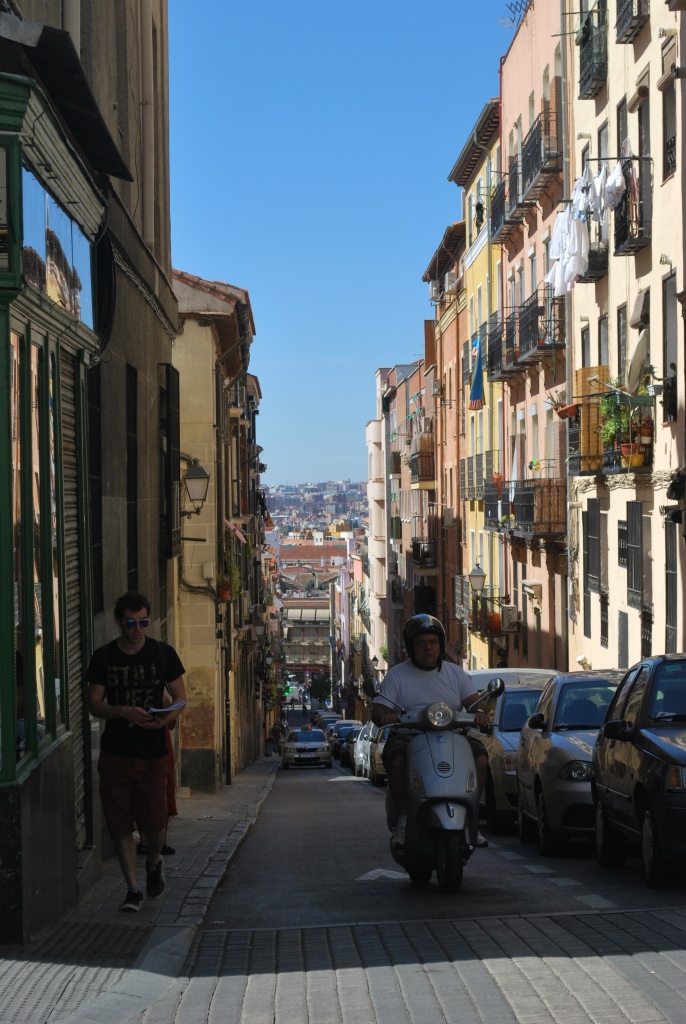 I had forgotten how hilly Madrid is. After all our walking I really envied this guy. Actually, I just wanted his scooter. In the end, going slowly on foot helped us to get the ‘vibe’ of the various neighborhoods we visited. 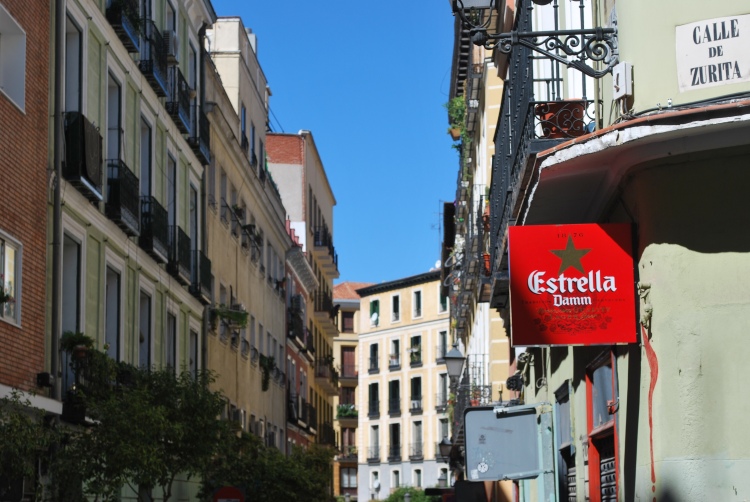 Every time I see a sign for Estrella Damm, I wish I was still a beer drinker. I’m immediately transported to Barcelona and the Costa Brava where I first enjoyed this cool, crisp, and refreshing brew. Sigh. 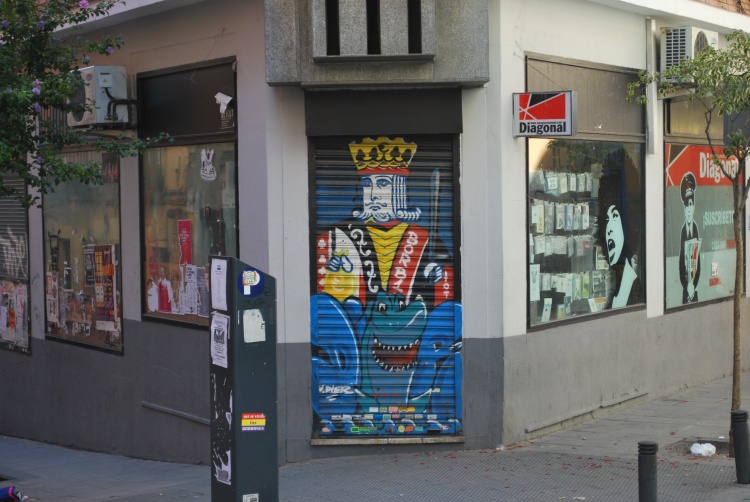 I have a feeling that the folks who own this shop must be real cards. 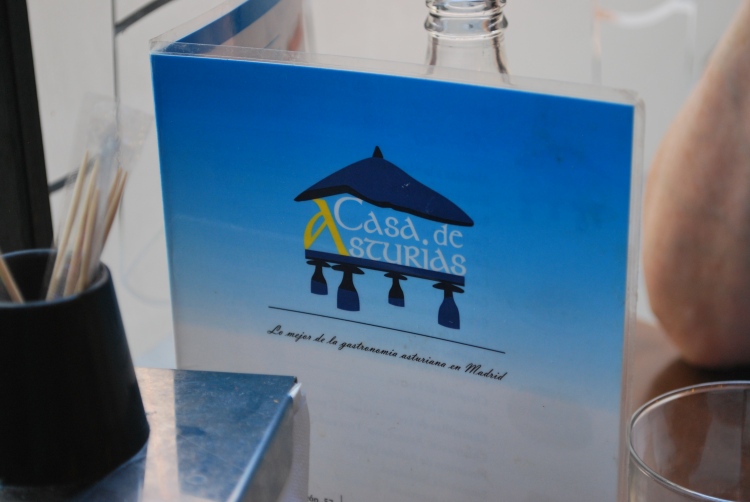 Our first meal in Madrid was lunch at a cafe deep in the heart of a rather sketchy neighborhood. The food — patatas bravas, pulpo, pimientos de Padron, and llomo Iberico — was excellent. But we were clearly not locals and stood out sorely. To take pictures of all the food, and the unfortunately bretty cider, would have made matters that much worse. All you get is the menu. 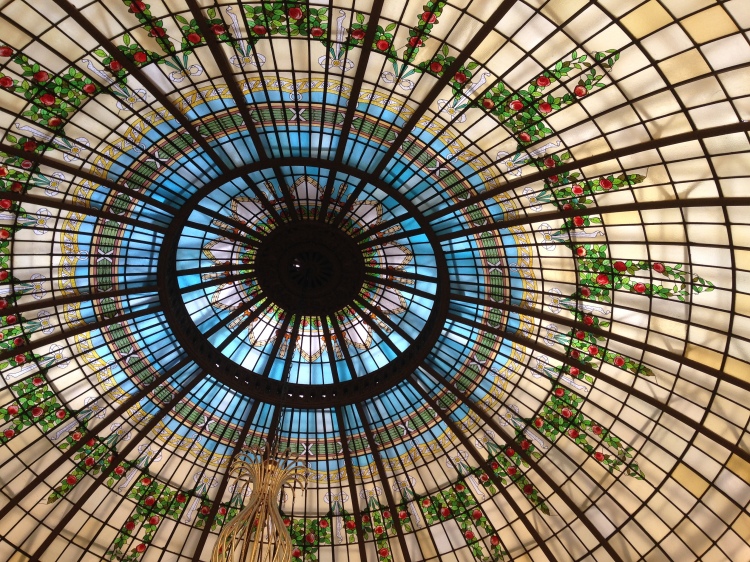 The dome of the Palace in the La Cupola lounge. Breakfast or lunch, afternoon cocktails or the obligatory night cap, there are few better spots to just sit and relax. 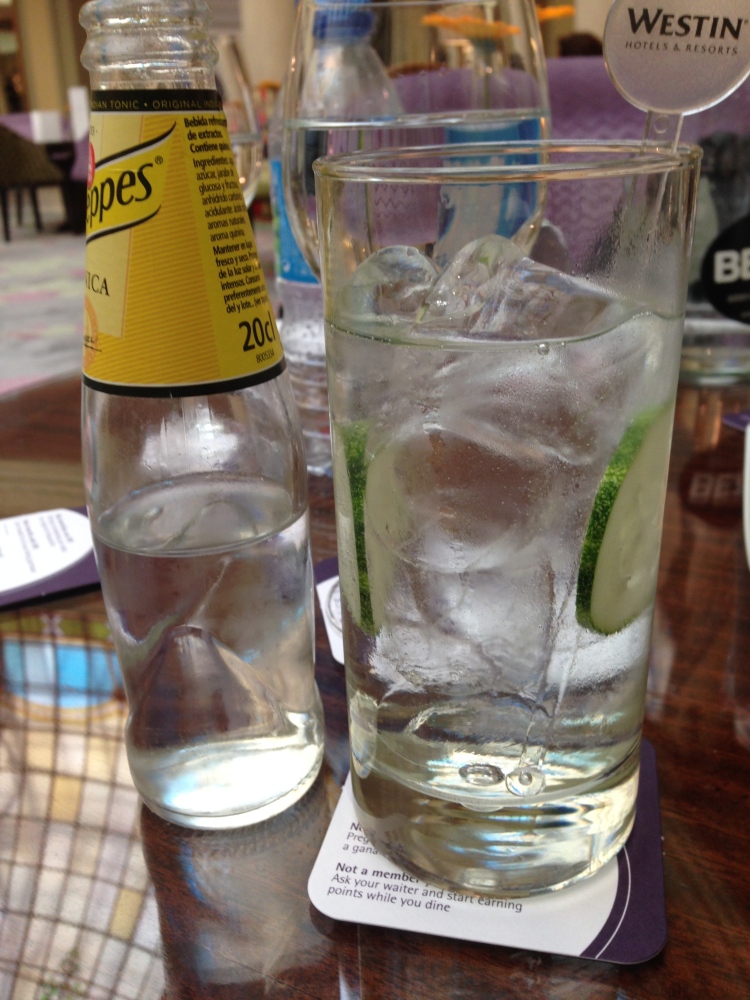 I’ve had several G&Ts since arriving three days ago. Unlike in the States, limes are not the common accompaniment to this magical mixture. Too often cucumbers, sometimes lemon. Yesterday I almost fainted when the seductive goblet arrived with slices of limes immersed. The drink here is an aberration, as large, heavy goblets are the customary vessel. Can you say gigante? 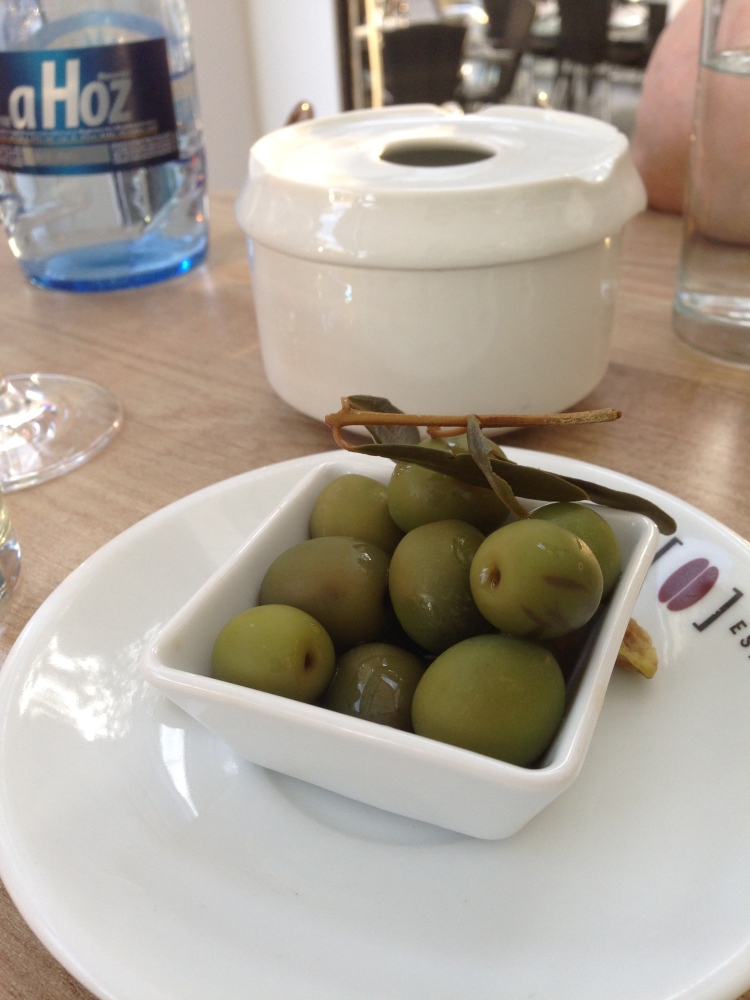 Maybe the best olives I’ve ever eaten. These were brought to us along with the bottle of cava rosado we enjoyed at the great wine bar and restaurant Garcia de la Navarra our first afternoon here. We returned for dinner the second night. 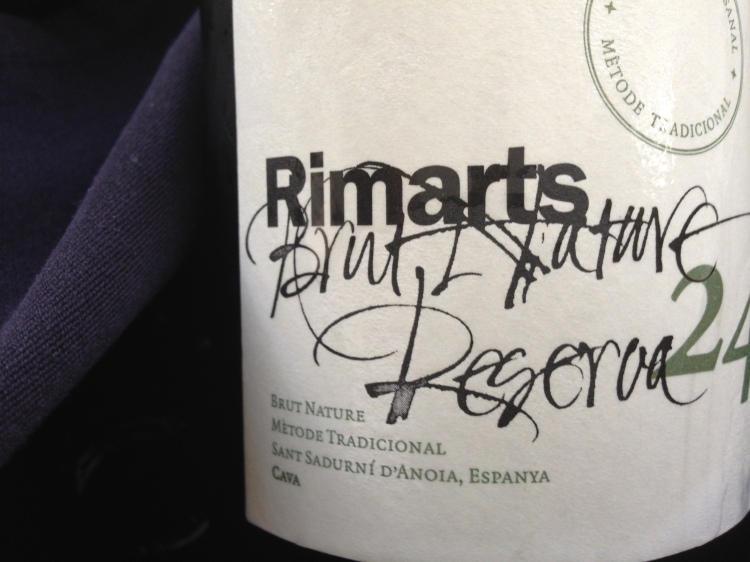 The aforementioned cava. In the heat of the late afternoon, this was a perfect refresher, balanced nimbly on the line between drinking and thinking. Not a simple quaffer but not a show-stopper. Just the right wine at the right time.

I think all sparkling wines should have this information. NV shouldn’t be a complete mystery. The consumer should have some idea as to what’s in the bottle. 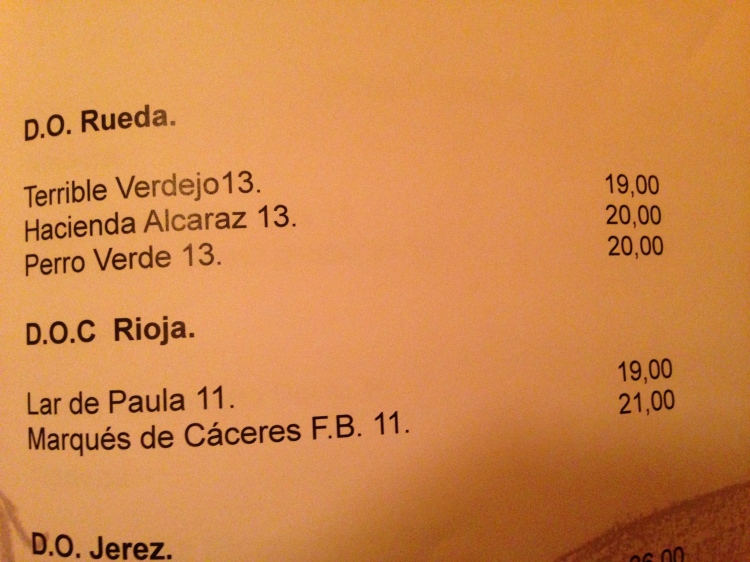 We opted for the Perro Verde. The first wine was dismissed for the most obvious reason, and the second reminded me too much of a Bay Area prison. See, that’s how you make a wine selection when you don’t know any of the producers. Pretty simple actually. 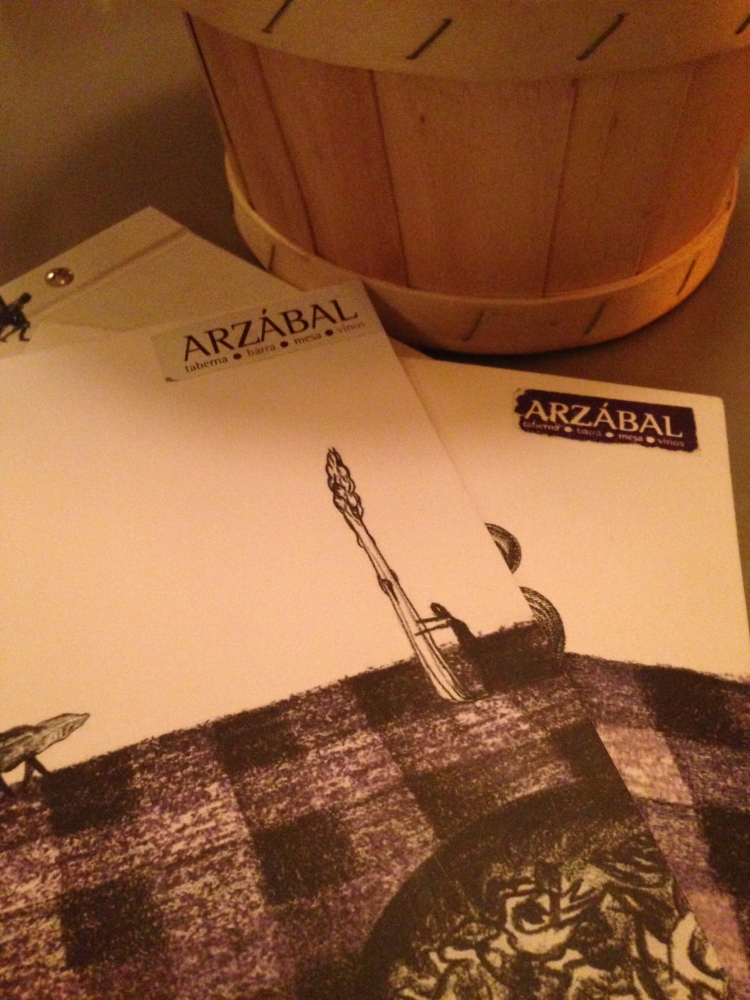 Highly recommended. When we mentioned to the waiter that two of our trio had wheat allergies, he brought out, after several minutes, some gluten-free rolls, warm from the oven, that now rank among the best breads of any kind I’ve ever had. Whatever their secret is, they need to share it, and fast. That was the opening salvo in a wildly flavorful meal. 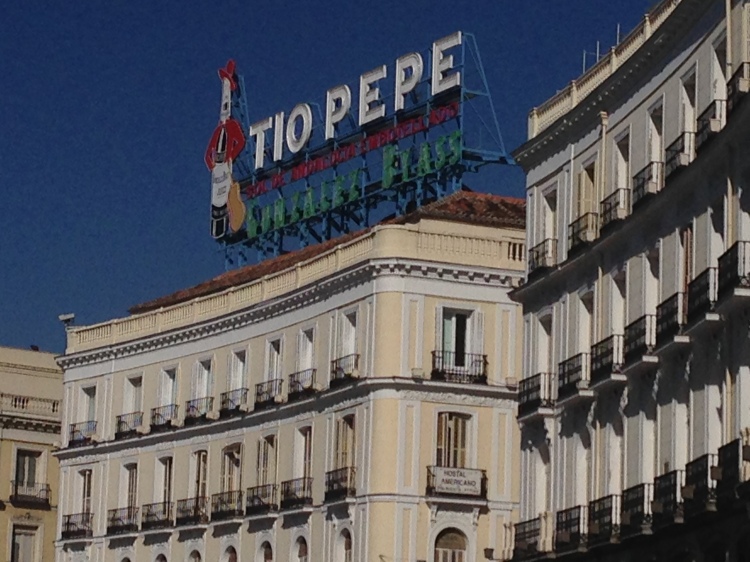 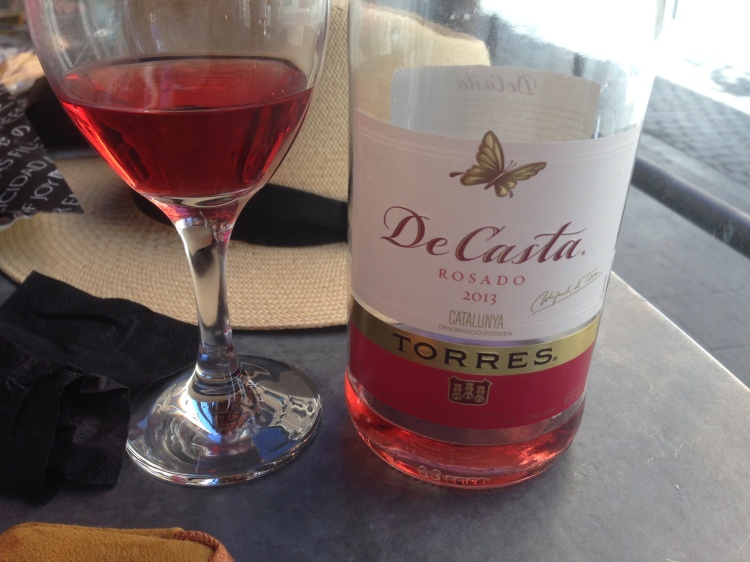 Day two of exploring neighborhoods for possible apartments deposited us around lunch time at Mercado de San Miguel, just off the Plaza Mayor. This easy-to-drink pink put some life back into our weary bones. 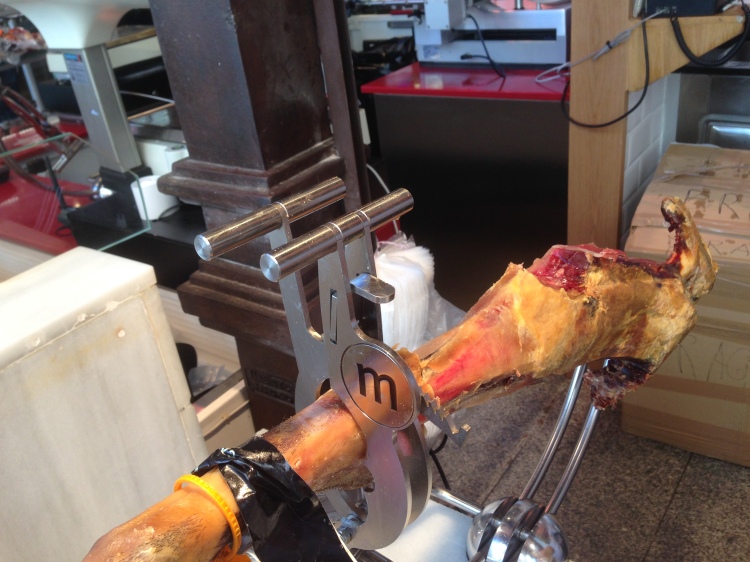 I’d love some ham, shank you very much. 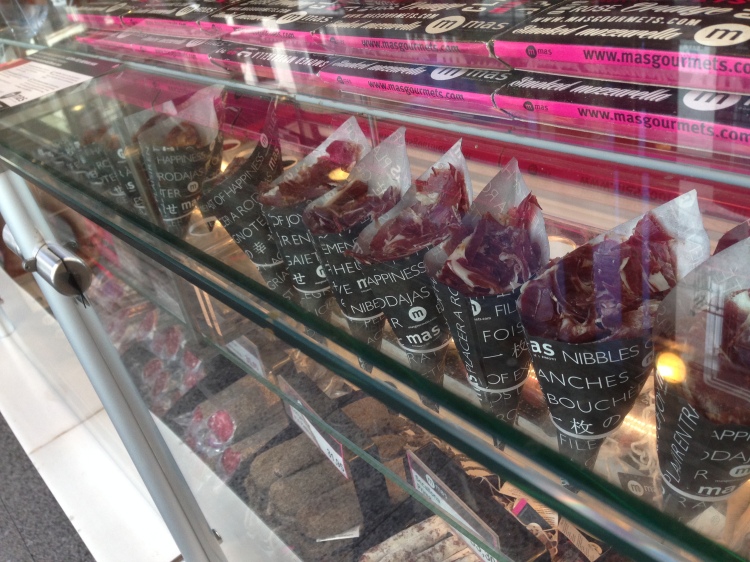 Cup o’ meat. Just what the doctor ordered. Sublime, melt in the mouth stuff. Nobody else in the world handles pig like the Spanish.

6 thoughts on “The Brain In Spain”