When I was invited a few weeks back to participate in Gloria Ferrer‘s annual Hands-On Harvest, I accepted immediately, but with some reservation. I’ve been to Gloria Ferrer many times over the years since it opened its doors in 1986 as the first sparkling house in Carneros. I have taken friends and family there countless times for the pleasant experience of sipping bubbles on their expansive front porch overlooking the vineyards. But, I must confess that despite being familiar, or so I thought, with their wines and knowing a bit about the winery’s history, I had just never developed the same enthusiasm or affection that I have for a number of other wineries in California and beyond. So, given my tepid take on what I regarded as a reliable but not outstanding winery, I figured I should go and see if my impressions, formed so many years ago, were still accurate. 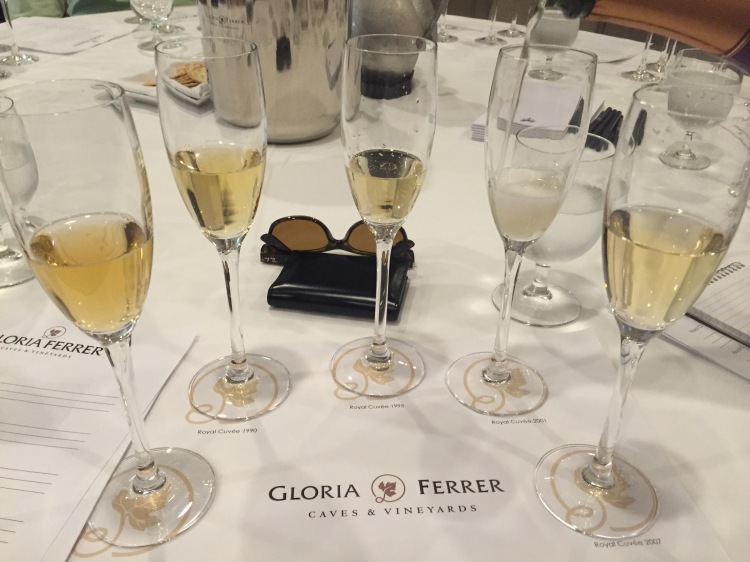 The learning started soon after everyone– mostly wine buyers and directors from around the country, with a few media types — arrived, with a vintage lineup of the winery’s Royal Cuvee — 1987, 1990, 1995, 2001, and 2007 — a blend of pinot noir and chardonnay ($37). Led by their winemaker, Steven Urberg, we came to understand the wines from several angles, including weather during growing season, blend percentages of chardonnay and pinot noir, winemaker decisions, and, of course, ageability. While I agreed with other participants that the 1987 was a delicious and intriguing wine, I was one of the few there who championed the youngest of the bunch, a heady, biscuity, and youthful wine, with an elegant body and robust flavors. It was a fascinating tasting session, one that gave me a new appreciation for what took place at Gloria Ferrer. If they were looking to turn us into fans, they were off and running. What goes best with good wine? Good food!

It’s possible to cook good food without a few glasses of good wine to accompany you. But it’s not very much fun. Thanks to the attentive hospitality of the Gloria Ferrer staff and their public relations consultant, Tia Butts, our glasses were never empty. That’s a good thing as the kitchen crews believed that slaking their thirsts was just not possible. This 100% chardonnay sparkler ($47) showed excellent composition — fine mousse, citrus and stone fruit flavors, refreshing acidity, minerally finish — and certainly helped us all be better cooks. That’s our story and we’re sticking to it.

Of the three wines we enjoyed during our evening at the original Williams-Sonoma shop on the historic Sonoma Plaza, the one that surprised me the most was the pinot noir ($27) from their Carneros estate. Concentrated but not heavy, with aromas and flavors of red berries and spice, and soft tannins, it finishes with a bit of savory earthiness. It offers bright acid and a silky mouthfeel. Nice surprise indeed.

Williams-Sonoma Chef David Leyva was a patient instructor as he guided his students in the preparation of our dinner’s opening courses. Here he shows Marcus Gausepohl, from Brennan’s of Houston, how to pipe goat cheese into roasted peppers.

Even though I grew up in the heart of the concord grape belt in Western New York, and many of my friends and their parents had worked in the vineyards at various points in the annual cycle, I myself had never worked in the grapes. At sunrise on Day Two, all of us headed to Gloria Ferrer’s Carneros vineyard at Circle Bar Ranch to pick the winery’s last four rows of the 2016 vintage.

Mike Crumly, Gloria Ferrer’s vice president of production, has been taking care of their vines for more than 30 years. We could not have had a better supervisor or mentor for what was, for many of us, our first attempt at picking grapes. When he said the knives were sharp, he wasn’t trying to scare us. Well, maybe a little. Curved razors and not much else. Watch your fingers! 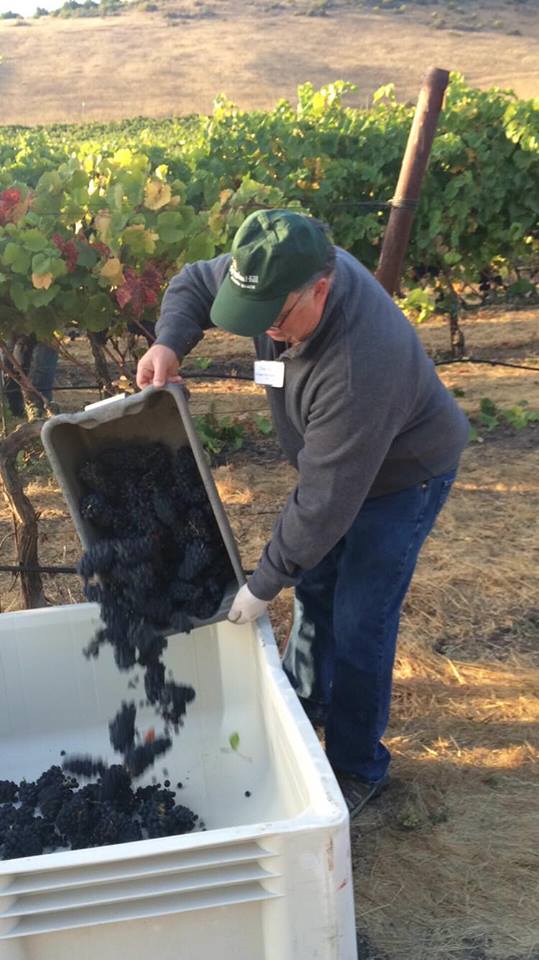 For a rookie I thought I moved along pretty well. That is until I saw a few GF veterans coming along behind us. The work is physically demanding and the crew helping us made it look far easier than it is. Our brief exertion gave me a heightened respect for the people who bring food to our tables throughout the year. Something we should never take for granted.

Pinot noir cluster. Looks big. It’s not. These bunches are quite small and delicate, rarely more than a handful, and they do their best to remain hidden behind and under the leaves. 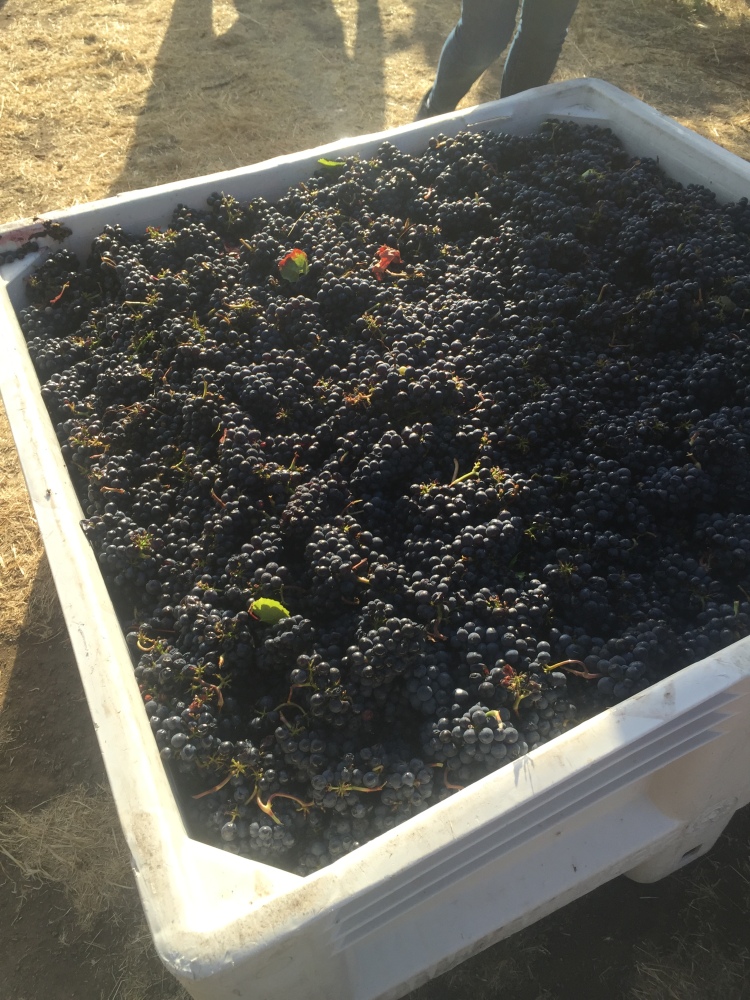 When all was said and done, the amateurs gathered in about a ton, maybe a ton and a half, of pinot noir, and Gloria Ferrer’s harvest for 2016 was finished. We’re already looking forward to receiving a few bottles of “our” wine when it’s ready for release.

Part of our morning’s harvest. It doesn’t look like much. Because, compared to what the regular crews bring in, it’s not. But some is better than none, and in the end these grapes still make pretty tasty wine. But first they  need to take a ride on the terrifying Destemmer!

Crumley pointed out the color variations in this vineyard as solid evidence of undulations in soil substructures and water levels. Knowing the vines so intimately allows winery managers and winemakers to make informed decisions on which rows and blocks to pick when.

One of the highlights of our morning was the chance to be the first non-winery personnel to taste WindVane, the new pinot noir project from winemaker Urberg. The fruit for this 100-case production was carefully selected from the finest pinot blocks in the estate vineyard, which, interestingly, are among the winery’s windiest parcels. Urberg believes that these turbulent conditions give the fruit great concentration and the wine a lush, mouth-filling texture. 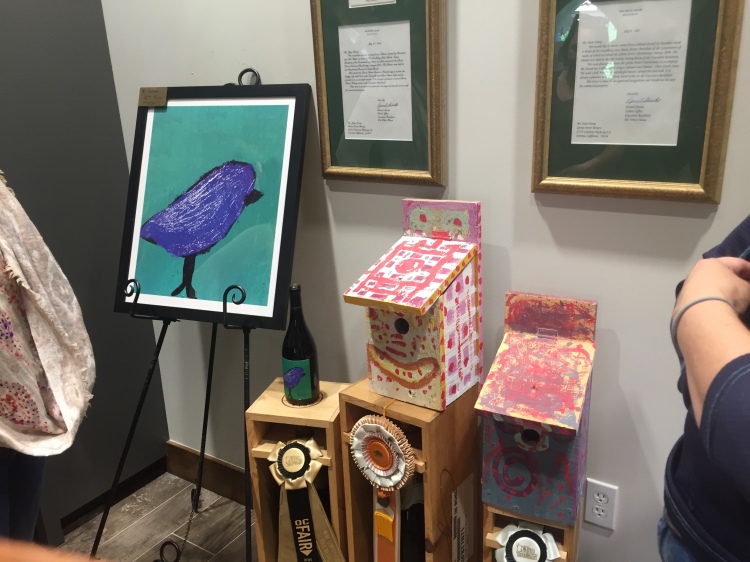 The more I learned about Gloria Ferrer, the more I began to see it as a family operation and less like the American ornament for a giant European producer. The top staff — Eva Bertan, vice president of marketing; Bob Iantosca, executive winemaker; and, Mike Crumley, vice president of production — have all been with the winery since before it opened its doors in 1986. Also, staff retention is almost axiomatic as the winery has consistently lower turnover than the industry average. The winery also sees greater Sonoma as part of its family. One example is its annual bird house project. Each year vineyard crew members build bluebird houses as part of the winery’s commitment to sustainable farming. (Bluebirds are great devourers of harmful insects.) But a number of the boxes are set aside and donated to SAY-Grief Services, a local bereavement program for children and adults dealing with the trauma of loss. The birdhouses are used in art therapy programs and then auctioned and sold at various times during the year by the winery, with the funds being donated back to SAY. This is just one of the long-term philanthropic efforts underway at Gloria Ferrer.

Just before lunch, Urberg offered a seminar in which we tasted five of the various pinot noir clones that he uses in Gloria Ferrer’s sparkling and still wines. It was a fascinating insight into the complexity that comes with the blending of fine wines.

The two-day event ended with a roundtable discussion focused on the marketing of sparkling and varietal wines. But, before everyone sat down to business, we sat down to lunch, a sumptuous three-course meal on one of the winery’s spacious patios overlooking the estate vineyard.

Some journalists, including a number who cover the wine industry, believe that press trips and other similar opportunities are nothing more than inducements that prevent writers from ever being objective in their reports. I understand that point of view, certainly, but I don’t think I can accept it completely. If you’re so easily swayed by a few alleged baubles, then how good of a reporter are you? A good press opportunity can give you access to things normally hidden from regular observation. I went into Hands-On Harvest with these thoughts and concerns in mind, especially given my feelings about the winery prior to the event. But, I can honestly say that I saw enough, and learned enough, during the two days to change my opinion, and not just a little. Gloria Ferrer is not some soulless label, as I had imagined, churning out wines in mindless imitation of its much larger European parent. Owned by a family, and operated like one as much as possible, Gloria Ferrer is a winery proud of its place in history as the pioneer sparkling house in Carneros, and the role it plays in the Sonoma community, as well as in the ever-expanding American wine market.

From now on, when I talk to people about Gloria Ferrer, I’ll have so much more to tell them. And, finally, I’ll know what I’m talking about.