I have to confess that I have been an undisciplined wine shopper lately, not on the look-out for a good bargain nearly as often as I should be. Too much of the time I stick to known producers and a few favorite grapes, when I should be poking around in search of something new and exciting, whether it be a particular region or a variety I don’t know all that well. Despite this frightening inertia, the universe does conspire in my favor from time to time. Recently, I had several samples from the Cariñena region in northeast Spain fall into my lap. Not familiar with the region? I wasn’t either. But these wines, most of them certainly, caught my attention and made me take a closer look.

Here’s a quick bit of background courtesy of Jancis Robinson’s Oxford Companion to Wine: “Cariñena, town in north-east Spain which lends its name to both a denominated wine zone and a vine variety, widely grown in southern France as carignan. Although it is thought to have orgininated in the area,

(officially known as Mazuelo in Spain) the vine has been widely abandoned here in favor of garnacha, which seems better suited to the arid growing conditions in this, the largest of the four DO zones of the Aragon region. But Cariñena, like so many other regions of Spain, is trying to break with the viticultural and winemaking flaws of the past.”

I can’t speak for the wines of Cariñena’s past, but I do know this: once the word gets around that there are great values to be had here, things are going to change. And one of those things is price. Right now, there are terrific values coming out of Cariñena. My advice is to get on top of the region, find a few bottles that you really enjoy, and stock up. This golden goose, I fear, won’t live forever.

2012 Viñas Viejas de Paniza (Bodegas Paniza Co-Op) Garnet core to purple-pink rim. Aromas of red and black cherry, vanilla, slightly floral. On the palate plenty of sour cherry; finish is short and a bit hot. Decent value but nothing more. A drinker, not a thinker. Pizza and tacos would be complementary fare. 100% garnacha  14% abv  $10-12 SRP

2014 Artigazo Edicion Limitada (Bodegas Grandes Vinos) Rim starting to fade a bit; red cherry and baking spice aromas followed by a slight confected note with strains of vanilla. The alcohol here is not shy; gentle tannins are mouth-coating; juicy red fruit and refreshing acid, with some earthy notes on finish. Not sure the cabernet sauvignon really adds to the overall quality. Would be better, I think, without it. Could be a good match for grilled or roasted meats. 40% garnacha 30% syrah 30% cab sauv  15% abv  $20-25 SRP 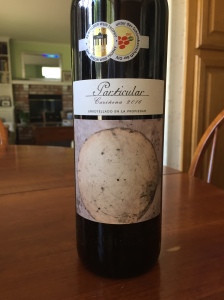 2016 Paniza Cariñena (Bodegas Paniza Co-Op) Confected cherries and spice; slightly cloying in the mouth; cherry jelly; medium finish and a bit hot as alcohol asserts itself. Not the best of the bunch. Might be suitable for a backyard party where nobody is really paying attention to what’s in their glass. 100% cariñena  13.5% abv  $10-15 SRP

spices. Fills the mouth with bright and juicy cherry and raspberry flavors. Balanced, complex, and refreshing. A great mouthful of wine. Beautiful typicity — what garnacha is supposed to taste like. I would not mind having a case or two of this lying around. 100% old vine garnacha  14.5% abv  $17.99 SRP

**Samples from Gregory + Vine (Thank you, Stefanie Schwalb). (Number four in the lineup was the Bodegas Grandes Vinos 3C — flawed)

**Thanks to Tina Morey, of Wine Studio, for introducing me to these wines and producers. http://www.winestudioTINA.weebly.com

**Photos courtesy of The Grape Belt and are not to be used or reproduced without express written permission. Including photo of Wine Grapes (Robinson, Harding, Vouillamoz), p. 616.