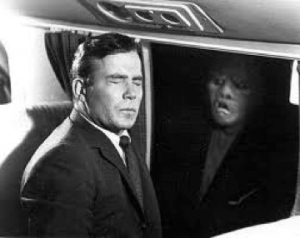 I expected Rod Serling to crane his neck around the first-class curtain and launch into one of his Twilight Zone epilogues. The flight had been that bad. Remember the episode in which a youthful Bill Shatner loses his mind on an airplane when he sees a gremlin on the wing but nobody else does? Alone in his fear, he collapses into insanity. Yes, it was that sort of flight.

My wife and I were headed east to NYC to visit our daughter, a month into her frosh year, for her college’s Parents’ Weekend. We had aisle seats across from each other. Next to me, in the middle seat, was a well-dressed, petite woman in her late 50s, early 60s. When flying I like to sit next to people who are smaller than I am, who don’t take up all the space that I want to take up. This woman fit the bill perfectly. Her compact frame was the first and last good thing about her, at least as far as I could tell. She might be a great philanthropist or a hospice volunteer.

I don’t know. I never found out. What I do know is that she now holds top spot in my imaginary pantheon of all-time wine jerks. Snob might be an apt term, but there has to be something beyond snob, when what the person is spewing gives snobs a bad name.

Our conversation started innocently, comments traded about the weather and airline travel, why we were each heading to NYC. She lives in Manhattan, on the Upper East Side, she told me, in the 70s. I mentioned that that part of town has some great wine shops. She asked if I was a fellow oenophile, using the word without any self-deprecation or irony. Uh oh, I thought, that’s not a good sign. I admitted that I was a wine lover, that I worked in the industry, and, foolishly, I asked her what sort of wines she liked to drink. “I have rather simple tastes,” she explained with a clenched-jaw drawl that made me think she might be William F. Buckley’s little sister. “First growth Bordeaux, grand cru Burgundy, but mostly small production cabernets from Napa. Not much else really interests me.” I explained that, while I thought wines from those places were, 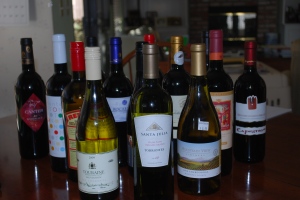 obviously, great to enjoy, the wine world contained so much more than what those three areas could offer. Didn’t she ever drink grenache or sangiovese? Wasn’t she curious about ports and sherries? South America is booming, I told her. Besides, I added, those wines are great for special meals, or for celebrations with friends, but what about simple meals early in the week. What do you drink on Mondays and Tuesdays? “Oh, mostly things like Caymus and Spottswoode, ” she said, naming two Napa cabs that run from $70 to $100+. “We have so much of  them my husband and I have to get rid of them somehow,” she said with a chuckle. “We might have some Lynch-Bages or Beychevelle for a change of pace,” again naming wines that run easily into triple digits for a good vintage. Then what about 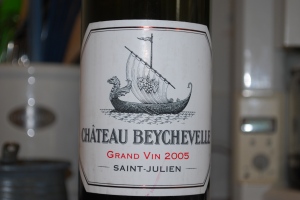 those special occasions, I asked, guessing as I said it just what her answer would be. “Oh, that’s what the Lafite and Mouton are for. If it’s lighter fare, I enjoy one of the DRCs.” Oh, you mean those cute little pinot noirs from Burgundy that cost hundreds, and often thousands, of dollars? How nice. I imagined her and her husband standing amid their thousands of bottles — yes, she told me how much wine she had — trying to chose among so many similar kinds of wine.

The next hour, which seemed like an entire day, was spent listening to her talk about her “casual jaunts through Bordeaux and Burgundy” and her regular trips to Napa, where she probably slummed it by staying in hotels with only four stars. I’ve met some name-droppers in 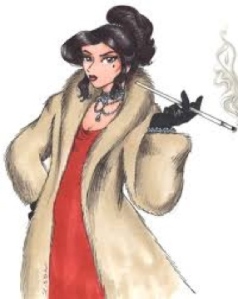 my time but this woman made them all sound like hapless rookies. She put together a list of winemakers and winery owners that looked like a cut-out from the index in a wine atlas. It was a tour-de-force performance, one that I almost found myself admiring for its sheer audacity and boundless self-promotion. I wish I had a video of it. I could use it for a seminar on how to be insufferably boorish in a limited amount of time.

Okay, I get it. She’s rich, and she can afford pricey wine. But don’t call yourself a wine lover, an oenophile (sniff, nose in air), and then talk about how you only drink a painfully limited array of wines, and only the most expensive ones at that. Another sure sign that she wasn’t really a lover of wine, but only a lover of shiny expensive stuff? She asked not a single question about what wines I enjoyed, what it was about wine that fascinated me. These are questions that all true wine fans ask reflexively and often. Maybe her sensibilities were so refined that hearing about my recent find of a $10 Portugese red, or my favorite Loire Valley white that’s a steal at $15, would be a shock to her system. This lady needed a good Chateauneuf-du-POP right upside her head, 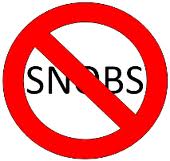 but I wasn’t going to be the one to give it to her. After a little while I didn’t care. I turned away and took a nap.

I dreamed of a gremlin. But mine wasn’t on the plane’s wing. It was in the seat next to me.

6 thoughts on “Only William Shatner Would Understand”